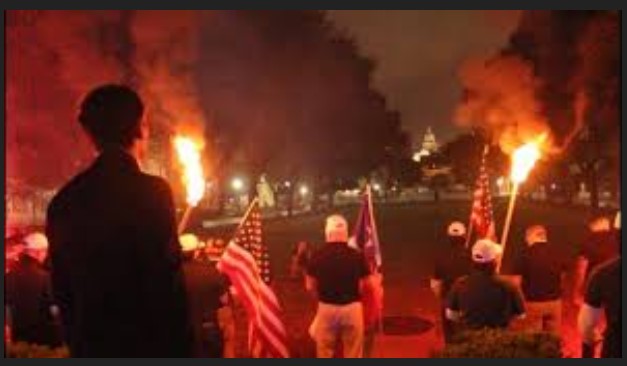 Warning: this post contains descriptions of racist and anti-Semitic ideology that you may find offensive. We do not use words like “racist” lightly, and we have chosen to include this content because it is the clearest and most effective way to show what this group believes. Some links in the text of this post point to the group’s chat logs, which contain abundant offensive language and imagery. We have included these links so that you can verify their content for yourself. Please consider the nature of the content there when you decide whether and when to follow those links.
– Utah Antifascists

The hate group calling themselves “Patriot Front” (PF) has been active in Utah for at least two years. Recently they seem to be increasing their activity along the Wasatch Front, so we thought this would be a good time to give Utahns an introduction to the group’s agenda and strategies.

Propaganda from hate group “Patriot Front” was posted recently in a neighborhood in Provo.

The first thing to know about this group is that they are liars (and yes, we can prove it). They’d like you to think they’re just patriots who love their country and want to fight communism, or degeneracy, or some other threat that is more or less vaguely defined. The truth is that regardless of what they claim to oppose or support, they are not patriots. They are racist, they are anti-semitic, and they want to destroy the US system of government, not preserve or protect it. But don’t take our word for it – take theirs.

“Only whites can be American.”

Their manifesto, as it currently appears on their website, is full of dramatic language about national decline, decadence, tradition, struggle, greatness, etc. but oddly short on specifics about what exactly is causing the decline and how they plan to fix it. This is intentional. However, it’s important to understand that this is a revised version of the manifesto – and the original was a lot less subtle.

As an example, a section on citizenship currently reads, “Those of foreign birth may occupy civil status within the lands occupied by the state, and they may even be dutiful citizens, yet they may not be American.” But the original version said “An African, for example, may have lived, worked, and even been classed as a citizen in America for centuries, yet he is not American.” The group’s leader, Thomas Rousseau, removed all doubt about the intent of this section when he discussed it with his followers online. In the leaked chat logs of a private Discord channel, he refers to the passage about “Africans” and then adds,

“We clearly state in the manifesto that not only are we going to have a White nation, but only Whites can be American.”

This group is fundamentally racist. They know other people think racism is bad, so they changed the words on the website. It doesn’t change what they are. The group’s leader, Thomas Rousseau, clearly doesn’t see anything wrong with racism. In fact, if you think racism is wrong, he sees you as his enemy.

You can read the chat log where he said this, and lots of other racist things, here.

“The only answer to the Jewish problem is no Jew at all.“

The group actively promotes the conspiracy theory that Jews control the world’s governments and global financial systems for their own nefarious purposes. PF uses images like this one to suggest that greedy Jews are attacking America, and that communism is part of the Jewish conspiracy. 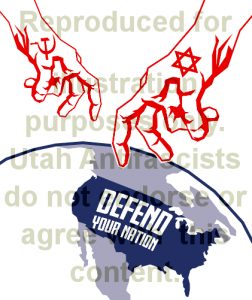 In their chats, they discuss how to convince people around them that the Jews are their enemy. A user named Dustin offers,

“if you know somebody who views life through the lens of religion, you have to attack from that angle.”

Another user replies, “Just quote some bible verses, get them thinking. ‘But [they] are of your father the devil…'”

Unsurprisingly, the group is also anti-Islamic.

The poster shown at right in the above image tells the viewer to reject the “false dichotomy” between Islam and Judaism. Hate groups love to talk about first-amendment rights when spreading their hateful ideology, and indeed, the first amendment to the Constitution guarantees them the right to say all kinds of disgusting and morally repugnant things if they really want to. But in this case they seem to have overlooked some other, equally important first-amendment rights.

Notice that they are advocating the removal of Islam and Judaism from the country: “both must go.” Since the first amendment declares, “Congress shall make no law respecting an establishment of religion, or prohibiting the free exercise thereof,” it’s difficult to imagine how Islam and Judaism could legally be “removed” from the country as long as the first amendment remains in place. This leads us to another principle this group is founded on, and which they intentionally obscure in their literature.

“It would be done by having Whites secede”

PF wants the US system of government to be overthrown and destroyed. This is not an exaggeration. In their private chats, their leader lays out his vision of how this will happen. We quote him here at length to make it clear what this group’s ultimate goal is, and how they believe it will be achieved. Rather than Civil War-style state-by-state secession, Rousseau says, “It would be done by having Whites secede, so to speak, from the state. Fully detach the nation from the State, and once that happens on a large enough scale, not all Whites have to do it, perhaps not even the majority, the State will not be powerful enough to stop them. Keep in mind that Whites are the only race (perhaps besides Asians) that are a net financial benefit. Once the cash cow of White America stops giving milk, the non-Whites, hungry for [welfare], would most likely destroy the State themselves. From then a period of reconquista would begin […]” He gives a few historical examples of “reconquista,” then continues,

“Whites invaded and controlled almost all of Africa in decades, and there’s nothing to say that we couldn’t control what was formerly known as the United States in a similar length of time. The movement would change hats from revolutionary, to one based in irredentism.”

The theme of “revolution” is prevalent in this group’s manifesto and in their propaganda. They proclaim “revolution is tradition,” and imply that they are advocating for a sort of spiritual revival that will “reclaim America” from modern, decadent influences. They call themselves “patriots” and like to use the phrase “America first” to describe their agenda. But they are not patriots in the sense that most Americans use the word. What they want is a violent revolution – literally an overturning of the current system of government. When they say “America first,” they do not mean the representative democracy that is the United States of America; they mean the whites-only American nation that they will “reconquer” from the non-whites that now inhabit the country. 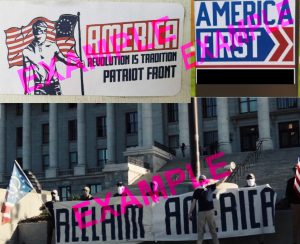 There’s a lot more that could be said about their rhetoric, and the ways they hint at their true beliefs and intentions while maintaining plausible deniability in public. We have chosen not to engage with the messages in their recent propaganda, because part of their strategy is to post innocent-looking material in public spaces, then wait for someone to call it “racist.” This gives them publicity from local media outlets that would not normally publish or broadcast paid advertising for a hate group, let alone give it to them for free. It also allows them to portray themselves as victims of false accusations, and paint anyone who opposes them as bigoted, anti-free speech, or even racist – “you just hate us because we’re white!”

Don’t fall for it. This group is a hate group. They are racist. They are anti-semitic. They are not patriots. Their own words prove it, and no amount of red-white-and-blue candy-coating will change what they are or what they stand for. 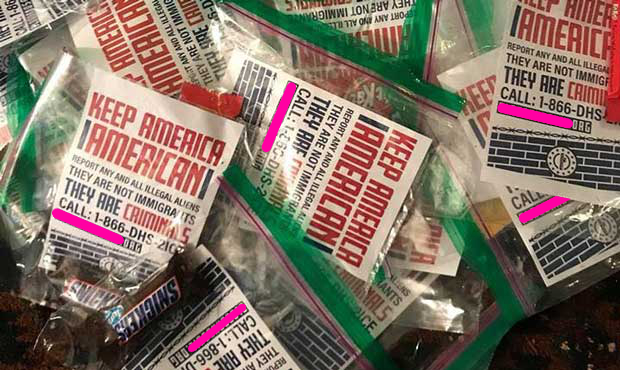 In March 2019 in the Seattle area, PF distributed fliers advertising their website inside plastic bags with candy in them.

If you see their propaganda in your neighborhood, tear it down, or cover it up with something else. Utah should be a place of refuge from hate, not a place that advertises for it.