Warning: this post contains descriptions of hateful ideology. We do not use words like “fascist” or “nazi” lightly, and we have chosen to include this content because it is the clearest and most effective way to demonstrate David Hansen’s beliefs. Some links in this post also point to other websites with further information about these subjects. Please consider the nature of the linked content when you decide whether and when to follow those links.
– Utah Antifascists 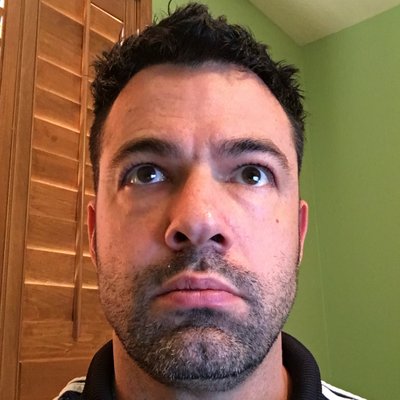 Iron March was an international fascist web forum that was taken offline in 2017. The site supported multiple far-right extremist organizations, including the US-based Atomwaffen Division. In November 2019 the forum’s SQL database was published on the internet, and anti-fascist researchers began analyzing the leaked data in an effort to identify forum users. You can view and search the data here, thanks to an interface provided by The Jewish Worker. This post was researched and written in collaboration with @savantifa.

We have identified “xor,” Iron March user #14099, as David Hansen of Arizona. He is a self-professed fascist, an anti-Semite, and a big fan of eugenics. He is also an active member of the InfoSec community, having attended various hacker conferences and associated events in the past few years. He’s even listed as an individual sponsor for BSides 2017.

When xor introduced himself on Iron March in 2017, he didn’t pull any punches. He identified himself as a 36-year-old computer programmer from the American Southwest, gave the usual spiel about his political views, and then went straight for the fashy stuff:

“The one thing that eventually turned me into a fascist is the realization that as long as Jews, degenerates, and the weak ruled and controlled the aspirations of our people, we would not only not reach the stars, but we would regress back to animals.”

So that answers that question.

We were able to tie David Hansen to the “xor” identity through the email he used to register on Iron March, me@daxorid dot com. While the WHOIS data for the daxorid domain is private, Hansen used the online verification service keybase.io to cryptographically verify his various online identities and tie them together. His keybase profile tells us that he uses “daxorid” as a screen name at Twitter, Reddit, and GitHub. 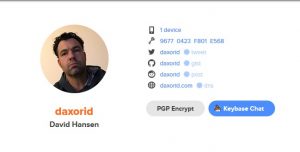 Incidentally, his chosen domain name, “daxorid,” can be broken down in hacker-speak to “da xor id.” “Xor” is the abbreviation for the boolean operator “exclusive or”; the symbol for “xor” is ⊻, which looks like the letter V. Substituting the symbol ⊻ for the letters “xor” in the domain name gives us da⊻id, or David. Clever. It also helped us confirm his connection to those accounts.

We were also able to connect him to the Reddit username diolpah because he linked it to a (now defunct) Tumblr with photos of himself, stating “Right now I look like this.” Notice that “diolpah” is the word “haploid” in reverse; he also uses “haploid” at his Linkedin account, and used “diolpah” as an alt at HN after he claimed his haploid account was “silent-banned.” 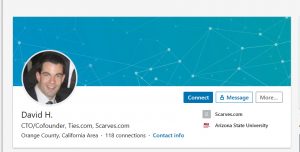 In addition to his brief stint at Iron March, Hansen used to be pretty open about his ideology on forums like Reddit, in spite of his own better judgement. In a Men of Reddit discussion on opinions that “many other people would find offensive,” he wondered, “do I risk this on an easily-doxed account?” Spoiler: the answer turned out to be “Yes.”

We chose to partially obscure a word in this screenshot; obviously the original post was unedited.

He’s also been somewhat incautious on forums like Hacker News. When one of the other users notes that the Allies’ opposition to Nazi Germany in WWII was not necessarily ideological, and that “In a way, we have Nazi military imperialism to thank for the fact that many horrible ideas are unacceptable today – otherwise there might never have been a backlash against them,” Hansen responds, “…yes, which is very unfortunate.” He then elaborates,

Without the moral baggage of WW2 and the unfortunate implementation history of eugenics programs in the 20th century, it may be easier for people to accept that encouraging the gradual improvement of the gene pool would actually be a positive thing for human civilization.

So in his estimation, the problem with the Holocaust is that it gave eugenics a bad name.

In addition to Jews and “degenerates,” he spends a lot of time hating on journalists, 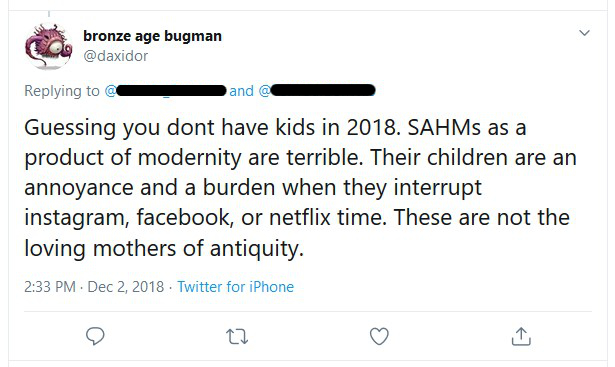 He also advocates violence against journalists. Maybe he’s indulging in hyperbole, or maybe he’s “just joking,” as so many neo-fascists claim when they’re called out on their hateful statements. But in light of his stated belief that “degenerates” and “the weak” are causing humanity to “regress,” his designation of journalists as “subhuman” is alarming. 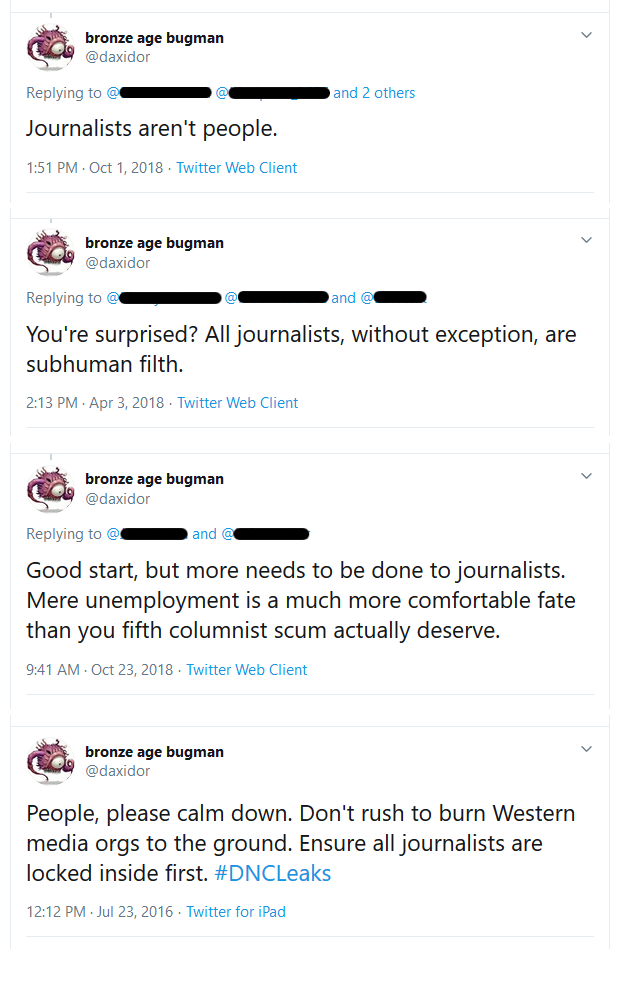 He likes to hang out in subreddits related to rationalism, which he regards as “male-specific” spaces because “For some reason women tend to run screaming from the topic.” He also laments that “far too many women” use sex as “bait”, and further believes the Rebecca Watson incident demonstrates that “asking a girl out for a cup of coffee is perceived as an atempt[sic] to rape.” This really makes us wonder about his Linkedin bio, where he lists his “specialties” as

But we all have to grow up sometime, and even the David Hansens of the world eventually realize that it’s prudent to save the Nazi apologia and casual sexism for private spaces like Iron March while maintaining plausible deniability in public. Or, to put it in his words, “Dogwhistling is often less dangerous in terms of karma annihilation than actually expressing the thought.”

In his case, this meant deleting – or attempting to delete – previous online expressions of his thoughts, and writing himself a Twitter bio like this:

(That’s a lot to unpack; if you’re not familiar with these particular dogwhistles, click on the linked terms to see their origins and explanations.)  Apparently Hansen felt that even with the use of coded language, he was signaling a little too blatantly; he has since dialed it back to “Big Igloo Respecter. Equality is a false god. #btfsttg”, although as of publication of this article he is still using the nickname “Bronze Age Bugman.”

After the Iron March data was leaked, he also renamed his @daxorid Twitter account, and deleted a tweet where he expressed the thought that journalists should be hanged. 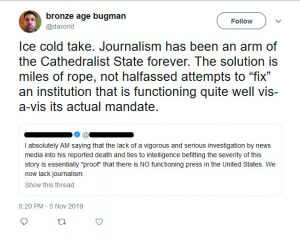 Hansen is also the co-founder and CTO of Southern California-based fashion retailer Wild Attire, which sells accessories like scarves, ties, sunglasses, etc. at their own online retail sites. We found no evidence that Hansen’s business partners agree with any of his opinions or his ideology; it’s possible they’re entirely unaware that he thinks this way. However, as long as David Hansen is associated with Wild Attire and its online outlets, folks may want to think twice before patronizing, or working for or with the company. Contact info:
info@wildattire.com
714.537.0334
7am-5pm PST

Additionally, there have been numerous reports in the past few years about incidents of sexual harassment, assault, hate speech, and disruptive behavior at InfoSec conferences. This has resulted in some productive public dialogue with conference organizers and attendees about how to make InfoSec events a less hostile environment for women, LGTBQ+ people, and those from under-represented backgrounds. Members of the InfoSec community may wish to consider whether welcoming an admitted fascist, anti-Semite, and bigot like David Hansen as an attendee and a sponsor at such events would work against the goal of making those events safer and more welcoming for all attendees.